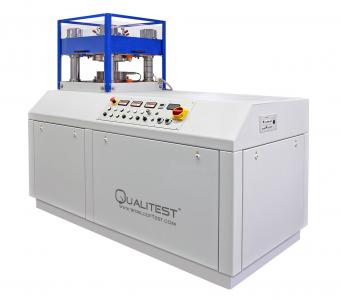 The Bulge/FLC Tester, Model 161, is an electrohydraulic testing machine to carry out the hydraulic cupping test on all ferrous and nonferrous metals.

In addition to the actual hydraulic forming process the design of the machine also allows the use of ball punches (FLC) up to a diameter of 100 to 199 mm.

A diagrammatic section of the bulge test device which is used in the Bulge/FLC Tester is shown in picture beside. The test panel (2) is clamped between the drawing die (1) and the blank holder (3). The chamber underneath the test panel is filled with special oil (4). The test panel is frictionless deformed into a bulge by means of the drawing piston (5) which moves upwards pressing the oil against the sheet metal.

The thicker the sheet metal and the higher the tensile strength, the greater is the drawing force needed to deform the test panel.

For the determination of the forming limit curves (FLC) in accordance with ISO 12004 the Nakazima test is described.

The principle of the Nakazima Test is based on the deformation of sheet metal blanks of different geometries using a hemispherical drawing punch until fracture occurs. By varying the specimen width, different deep draw and stretch forming conditions occur on the sheet metal surface. The characteristic, maximum strain values achievable (prior to failure) of the different shapes of specimens are determined, and thus define the forming limit curve of a material.

The hydraulic cylinder, the hydraulic aggregate aswell as the control devices are housed within the body of the machine.

The four-column frame with integrated test tool, allows the test of specimens up to a size of 400 x 650 mm.

The Bulge-/FLC Tester, Model 161, with programmable logic controller (PLC) is provided with a maximum drawing force (bulge force) of 1,000 kN . The bulge diameter is max. 200 mm. The control of the maximum drawing speed is effected via a proportional distribution valve with pressure balance. The blank holder force of max. 1,000 kN is infinitely variable and is controlled by a proportional pressure regulating valve. The clamping stroke is 180 mm.

The Bulge-/FLC Tester, Model 161, is equipped with analogue outputs for data acquisition when using an own evaluation systems. The captured data of drawing force and blank holder force can be processed in this way by a separate evaluation unit.

For safety reasons the test area of the Bulge-/FLC Tester, Model 161, is provided with high rigidity, transparent protective lids. The Testing Machine can only be started, when all protective lids are closed and thus it is no longer possible to reach into the tool area.

The operation of the Bulge/FLC Tester, Model 161, is most simple. After the specimen has been placed into the test head, the hydraulic system is started with the help of a push button whereupon in the first instance the test panel is clamped tightly. Thereafter the drawing piston moves upwards and presses the quantity of oil that is located between the piston and the test panel, into the direction of the test panel so that the specimen is formed into a spherical bulge.

The automatic crack detection can be activated by using the “crack" switch.

At specimen failure the drawing piston is stopped by way of the crack detection automatism and returns into its starting position. Since the crack detection automatism acts on a retrograde signal, it is possible that the sheet metal panel tested does not yet show a fracture, especially in the case of thick material. With the help of a time lag relay the switching-off can be delayed until the fracture occurs.

The acquisition and evaluation of the measuring points on the bulge surface can be carried out by optical evaluation systems like "Aramis" from GOM or "Auto Grid" from VIALUX.

For control, adjustment, documentation and filing of measuring data of the Sheet Metal Testing Machine. Software for recording of force/time dependency diagrams like drawing force and blank holder force. Creation of scripts (test sequences); pre-setting of freely selectable parameters such as drawing and blank holder force as well as drawing speed.

The measuring system integrated in the Sheet Metal Testing Machine is designed in a modular system with analogue and digital inputs and outputs. Hereby drawing force and blank holder force are acquired. The data are exchanged with the PC via a USB connection. This programme enables to create and evaluate test sequences for the bulge and FLC test.

If the Testing Machine is equipped with the optional facilitiy “Device for measuring the bulge pressure”, these signals can also be displayed, recorded and evaluated. The scope of supply includes PC, VDU and printer.