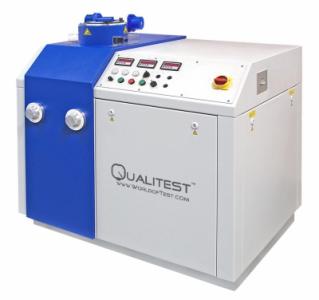 This Testing Machine can be used not only to perform effortlessly, quickly and accurately all important and known deep drawing tests for ferrous and non-ferrous metals, but it is also designed for a large number of additional technological investigations.

The Testing Machine is driven electro-hydraulically. The test sequence can be controlled automatically or manually, as desired. A programme logic control is used to control the functions of the machine. Drawing force and blankholder force as well as the drawing punch stroke are displayed digitally. The triple-acting hydraulic system in conjunction with the general design results in the following cost saving simplifications:

The Sheet Metal Testing Machine, Model 142, was developed not only for testing as a means for continuous production control, using standardised and other established methods, but also for research into all aspects of testing of sheet metal for deep drawing by studying all that is relevant to sheet metal forming.

Upon request, Model 142, can be equipped with analogue outputs for connection of a PC (incl. software pack).

A special software programme has been developed for the modified cupping test. The signals for the drawing punch stroke, the drawing force and the blankholder force can also be transmitted to a PC via an appropriate amplifier and A/D converter. A force/displacement diagram appears on the VDU.

For conducting the Deep Drawing Cup Test, for example in accordance with DIN 50 155, a special software pack is available producing a force/ displacement diagram over the full forming range as well as numerical results for drawing punch stroke, drawing force and blankholder force.

Hot Drawing Equipment up to 550 °C

A further valuable addition to the possibilities offered by Model 142 is provided by the additional hot drawing equipment. In this, the blankholder and drawing die are heated in an insulated container and special provision is made to enable these then to be set up without difficulty on the machine. An electronic temperature measuring device is incorporated, and on this the preset intended temperature and the current measure temperature are displayed. The pre-set temperature can be set up to 550 °C, and in the test, the temperature remains constant within ± 10 °C.

To determine also Forming Limited Diagrams at higher temperatures, the temperature accessory for Mod. 142-40 is the appropriate solution.
Tests according Nakajima- and Marziniak can be performed in order to evaluate FLC / FLD. This accessory will be assembled directly into the test cylinder. Hereby, the complete tool is heated to the desired temperature together with the test specimen, and then the deformation will be performed.

By using a cooling connection the jacket of the device can be cooled, thus the thermal load on the environment is minimized. The corresponding electronic control units are placed in a separate cabinet next to the machine. The opening in the test head of the hot-drawing device is manufactured, that optical 3D measurement systems can document and evaluate the deforming process. These Hot Drawing Equipment can be expanded for temperatures up to 950 °C.

Camera with tripod and lightning, for rupture detection according to ISO 16630 „hole expansion test“, incl. appropriate recording and analysis software

The Cupping Test (in accordance with EN ISO 20482, and corresponding to national and international standards) is a test providing simple and quick means of assessing the multi-axis ductility of sheet and strip using a procedure that relates closely to practical processes. The depth range reached at failure is, however, only an initial guide to the evaluation of the forming properties of the sheet metal.

The Universal Sheet Testing Machine, Model 142, (as is the case with all the modern electro-hydraulic Testing Machines) can as an option be equipped with analogue measuring outputs for

These analogue measuring signals are transmitted to a PC via an integrated amplifier and an A/D converter and a force/displacement diagram appears on the VDU.

The software enables the continuous acquisition of measured values with simultaneous display of the force/displacement diagram throughout the forming process. The data recording will be stopped after the maximum force is achieved in a cupping test or the deep draw test is finished.
This data is presented immediately on the VDU on completion of the test alongside the graph of the force against displacement.

Either a printout can then be obtained and the data saved or the data can be easily transferred to other evaluation programmes (e.g. Microsoft Excel). The scope of supply includes PC, VDU and printer.

The measuring system integrated in the sheet metal testing machine is designed in modular system with analogue and digital inputs and outputs. Hereby drawing force, blank holder force and stroke are acquired. The data will be exchanged with the PC via a USB connection. This programme enables to create and evaluate test sequences for tests e.g. deep-drawing cup test, bore expanding test, bulge test, deep drawing test (only in connection with the proportional valve technique). The scope of supply includes PC, VDU and printer.