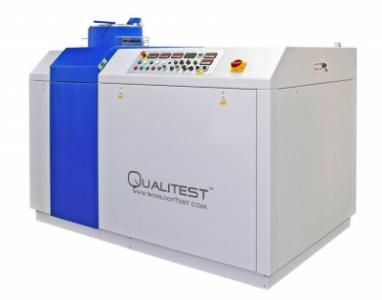 The special feature of Models 146-60 and 146-100 is the increased drawing speed of the drawing punch which, in addition to the normal drawing speed range of 0 – 1200 mm/min can be adjusted, in an infinitely variable manner and independent of load, up to 3000 mm/min. This is achieved by using a separate oil circuit, fed by a pump with high volumetric displacement. Contrary to the high speed attachment based on a nitrogen accumulator, here a constant drawing speed behaviour is guaranteed over the total displacement of 150 mm. As to the technical design and the options available, including PC control and proportional valve technique, this machines are similar to Models 145.

This Sheet Metal Testing Machine is not only ideal for the effortless, quick and accurate performance of all significant known deep drawing tests for ferrous and non-ferrous metals, it is also designed for a large number of additional technological investigations:

The Testing Machine is driven electro-hydraulically. The test sequence is controlled automatically or manually as appropriate. A programme logic controller is used for the functions of the machine (optional computer controls). The drawing force and blank-holder force as well as the drawing punch stroke are digitally displayed. The triple-acting hydraulic system in conjunction with the general design results in the following cost saving simplifications:

During the drawing sequence the constant sheet holder force acts on a continuously reducing area of sheet metal under the sheet holder. The result is increasing specific pressure as the remaining flange reduces with the result that in the final phase of the drawing process and especially in cases with severe ear forming tendency, a squashing of the ear-ends will occur. For this reason, provision is made to release the sheet holder pressure completely at a preselected depth where there is no more tendency for folds to form.

Hydraulic test head lifting function ensures a high rate of working safety and facilitates convenient testing due to the fact that the test head is hydraulically opened and closed.

Hot Drawing Equipment up to 550 °C

A further valuable addition to the possibilities offered by Model 146 is provided by the additional hot drawing equipment. In this, the blank holder and drawing die are heated in an insulated container and special provision is made to enable these then to be set up without difficulty on the machine. An electronic temperature measuring device is incorporated, and on this the pre-set intended temperature and the current measure temperature are displayed. The pre-set temperature can be set up to 550 °C, and in the test, the temperature remains constant within ± 1 °C.

Hot Drawing Equipment up to 700 °C

To determine also Forming Limited Diagrams at higher temperatures, the temperature accessory for Mod. 145 is the appropriate solution.
Tests according Nakajima- and Marziniak can be performed in order to evaluate FLC / FLD. This accessory will be assembled directly into the test cylinder. Hereby, the complete tool is heated to the desired temperature together with the test specimen, and then the deformation will be performed.

By using a cooling connection the jacket of the device can be cooled, thus the thermal load on the environment is minimized. The corresponding electronic control units are placed in a separate cabinet next to the machine. The opening in the test head of the hot-drawing device is manufactured, that optical 3D measurement systems can document and evaluate the deforming process.

These Hot Drawing Equipment can be expanded for temperatures up to 950 °C.

Camera with tripod and lightning, for rupture detection according to ISO 16630 „hole expansion test“, incl. appropriate recording and analysis software.

Generally the sheet metal testing machine will be equipped with proportional technology and difference pressure measuring. As option it is possible to select a PC controls/regulation with software.

The measuring system integrated in the sheet metal testing machine is designed in modular system with analogue and digital inputs and outputs. Hereby drawing force, blank holder force and stroke are acquired. The data will be exchanged with the PC via a USB connection. This programme enables to create and evaluate test sequences for tests e.g. deep-drawing cup test, bore expanding test, bulge test, deep drawing test (only in connection with the proportional valve technique).

The scope of supply includes PC, VDU and printer.