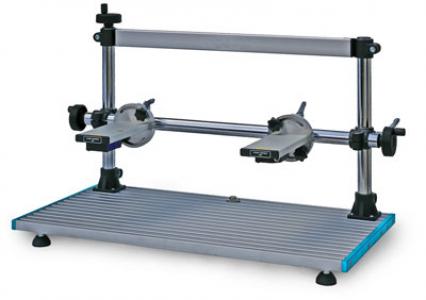 Some building materials like self-leveling flooring compounds ore plasters are applied in thin layers. These fast setting mortars set and harden within a couple of hours and subsequent drying of such a thin layer is generally terminated after the first day. In order to investigate the dynamics of early shrinkage and expansion we developed a special set-up of two laser units which are horizontally aligned. This set-up allows to investigate the different formulation parameters and their influences onto the different stages of shrinkage and expansion, namely the plastic shrinkage, setting expansion and drying shrinkage. The shrinkage/expansion behavior is strongly related to both, external (climate) and internal (formulation) factors. With respect to the latter, begin, intensity and duration of setting are key to the overall shrinkage/expansion behavior.

With building materials applied in thin layers shrinkageis one of the major issues because of two reasons: The high surface-volume ratio causes evaporation to be a dominant mechanism for strong and fast physical shrinkage, and the intense hydration reactions can cause a pronounced chemical shrinkage, or in case of ettringite formation a strong expansion.

The picture below shows a strong plastic shrinkage (shrinkage before setting) in the first hour. Close to the begin of setting, plastic shrinkage can turn suddenly into expansion. The current working hypothesis is that this is a pure structural effect related to a critical concentration of hydrates, which cause the mineral grains (cement, sand and fine-grained fillers) to become supported by a matrix of hydrates. From this moment on any further hydration causes the mineral grains to be pushed apart (expansion). The ongoing chemical shrinkage (caused by continued hydration), which contributed to plastic shrinkage before, is now producing porosity. As the hydration rate decelerates, evaporation becomes the dominant mechanism and forces the mortar layer to shrink again. In most cases, this drying shrinkage levels out during the first day and the mortar layer becomes stable in volume.